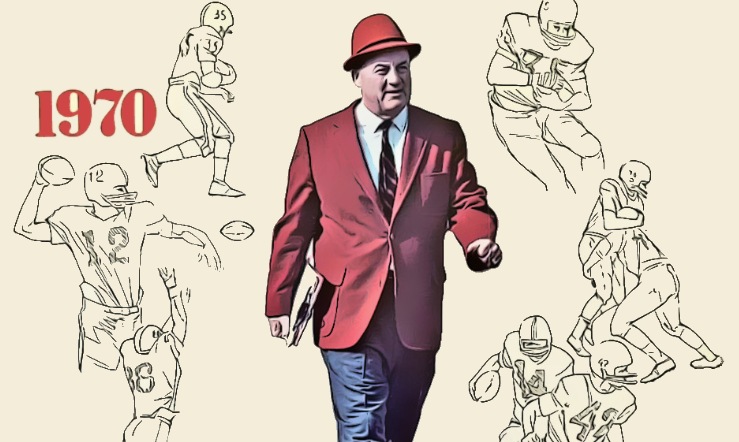 Huskers Bigger, Trimmer
Big, but trim looking. That was the general impression left by the 1970 football Cornhuskers as they paraded before the cameras on photo day Sunday. Generally, the younger players came back a few pounds heavier than they had been a year ago and the older players held the line or had trimmed off a few pounds. Fullback Dan Schneiss will be listed this fall as a 222-pound senior. But the veteran of two seasons reported in at 215 Sunday. “Last year at this time I weighed 225,” said Schneiss, “and I played at between 220 and 225 most of the season.” Schneiss offered a couple of reasons for his trimmed-down look this fall. “I worked some 14 and 15-hour days in construction this summer,” he claimed, “and I felt a little slow last year after having played at 215 as a sophomore.” Results from the traditional 12-minute run which gives a pretty good indication as to what kind of shape a player is in were generally encouraging. As fall practice opened the big concern was the status of the players who have had knee surgery since last season. The “wait and see” list includes defensive tackles Dave Walline and Larry Jacobson, offensive guards Bob Grenfell and Keith Wortman, running backs Joe Orduna and Frank Vactor, and safety Tom McClelland. All are optimistic for a complete recovery, but prefer not to go overboard with such a forecast until they have had their first taste of contact. That won’t come until later this week as the first three days of practice are to be without pads. Coach Bob Devaney, who claims he’s more enthused about this season than any other he’s started, has planned a major scrimmage Saturday. Sophomore defensive end Willie Harper, one of the top rookie prospects, was the only absentee Sunday. Harper, flying standby from, his home in Toledo, Ohio, was unable to make connections until late Sunday night.